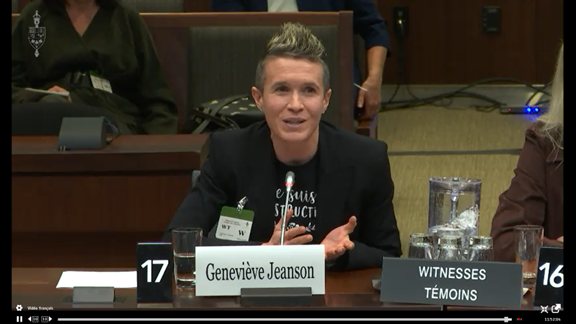 I feel very fortunate to have been invited before the Committee to tell my story, because you all have a part in the safeguarding of athletes, and are extremely important in the development of the future generation of athletes.

Please understand that what I’m going to speak about today are only my own experiences, and everything I say here is my personal opinion. I hope my testimony can give you insights on what can happen in the world sport, how abuse can take form, and the long term consequences of that abuse. For the sake of expediency, I’m going directly to the unedited version of my story – hence the blunt terminology.

For the purpose of this discussion, we can say that my story began at 14 yrs old, because it’s the age I was when my coach, who was 26yrs older than me, hit me in the head for the first time in a training session. I was told it was to make me a better, tougher athlete. He compared the world of competition to living in the jungle, and in the jungle, only the strongest survive.

I was taught to welcome assault, and trust that physical violence was a normal part of training – that it was actually good for me. At 15 yrs old, verbal and physical violence progressed to sexual assault and rape, which was immediately followed by threats like “I love you, I’m in love with you. If you leave me I will kill you, and then I will commit suicide”. I was never the same person after that first sexual assault – I build a thick shell so no one could ever find out what had happened.

Because I was living with daily violence, I believed that he could actually kill me, and that he could commit suicide. It was so real, that I could not leave; I did not want to live the rest of my life with the responsibility of the death of someone on my shoulders. Abuse for me also included performance enhancing drugs, which I started taking at the tender age of 16.

I was winning a lot of races as a junior, including the National championships against girls 2 years older than me, so my coach decided he would take more and more time off from work to focus exclusively on my athletic career and my development as an athlete. He eventually took a leave without pay from his job as a PhysEd teacher, and during that year, when I was 16 yrs old, we discovered I was anemic.

I was told I could not wait for the anemia to subside and get healthy naturally because I was the one who was supposed to win, get sponsors, and earn money for him to live. He brought me to a doctor and they decided to give me EPO in order to keep training and performing regardless of my anemia. What was supposed to be a few injections to treat anemia turned into career long doping.

To demonstrate the magnitude of my problems, I will transpose my situation into “regular life” context. In our society, when someone is engaged in illegal activities, he is therefore a criminal, caught or not. So in less than 2 years, from 14 to 16 yrs old, I became a victim of abuse, a cheater, and because doping is illegal in sports, a criminal in the world I lived in… at 16! I was a teenager without an escape route, with no one to talk to, and no one to help me.

The abuse became more frequent – there was rarely a training session without verbal, psychological, and physical violence. My coach took control of everything; who I was able to talk to, when I was able to go out, everything regarding finances, etc. I was desperately trying to find a way out of the sport to leave him but I couldn’t find one. I could not “just stop” because I was earning money for him to live and he made sure to remind me of that – that he had left everything in his life, including divorcing his wife to take care of my career… so it was all my fault.

I could not go to another coach because of his suicide threats. I could not share my story with my National or International federation because revealing everything would have me accused of cheating and therefore lose my whole career, my life, and my name.

I was down to thinking that the only solution was to get into an accident – not an accident that would kill me, but something serious enough that I could finally make everything stop.

Well, my higher power took care of my wish because instead of getting into an accident, I failed a drug test. I got a 10 year ban from all sports. I swear, failing that drug test was the best thing that had ever happened to me. I was immediately relieved, because it meant that I could finally stop cycling and leave my coach.

My life was so horrible that a positive drug test was just a small inconvenience in comparaison to what I was living daily. Having my name tarnished forever was a cheap price to pay to finally get rid of him.

Until 2015, I was more comfortable having my name and identity associated with performance enhancing drugs than being associated with the abuse I had been a victim of. In 2015, when a good part of my healing had taken place, I finally felt ready to open up about the violence I lived through, and how I was coerced into taking performance enhancing drugs, but I was not yet ready to talk about the sexual assaults. To me it was still too dirty, and too shameful. I was afraid no one would love me after knowing what had happened. It is only in 2021, after reading more and more stories about abuse in sports, that I’ve decided to share the full extent of my experience with abuse – the story I just told you today.

With that being said, please don’t tell me you are sorry for what happened to me. Being sorry will not change the past. Be sorry that the culture of sport is still what it is today. Be angry that things are not moving fast enough in the safeguarding of athletes.

Because I believe I can be part of the solution and influence the change of culture that must be imposed in sports, I got involved with Sport’Aide and am extremely grateful to have a voice here today, in front of the Committee.

It is my wish that with what you’ve heard today you help us make the following changes, so here are my recommendations:

I sincerely hope that the work you are currently carrying out will not be shelved. I, like many others you have heard in this room, will push for change. You have the decisional power, and we are relying on you to give us the support we did not get as young athletes. Thank you again for having me among you today.