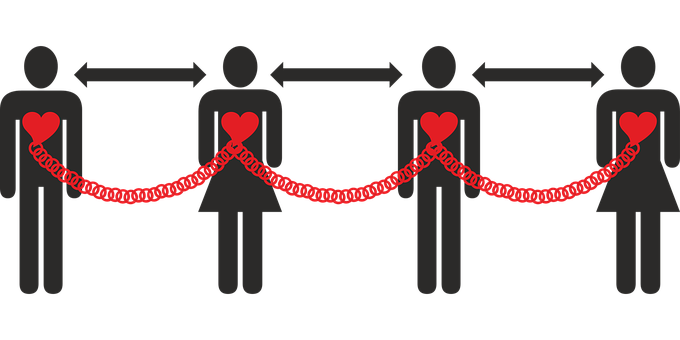 Solidarity in a time of COVID-19

In our most recent blog, we defended the fact that the presence of a disease like COVID-19 could lead to avoiding other people. On the contrary, we didn’t understand why we still wanted to see our loved ones, despite everything. Of course, there’s the fact that we long to see them, but you have to admit, they are just as likely, if not more likely, to transmit the disease to us. Like the good Dr. Arruda stated, most of these cases are transmitted by the family. Wouldn’t it therefore be more logical to avoid them like the plague? It seems that, combined with longing, the behavioural immune system (BIM) has a role to play in this process.

The BIM and conformity

Activating the BIM has two social consequences. The first is a greater aversion for people who are not familiar and strengthening of the cohesion with those who are (Ackerman & al., 2018).

This trend can be observed from the point of view of countries in terms of conformity and deviation from the norm. People living in countries that experienced a strong prevalence of pathogens are less open to new experiences (Schaller & al., 2008). These countries also have values involving less sexual freedom (Schaller & al., 2008), more conformity and less openness to deviating from tradition (Fincher & al., 2008). Finally, the presence of pathogens strongly predicts the presence of an authoritarian government in power (Murray & al., 2013). This means a government focused on compliance with traditional values, repression of dissidence and devotion to order and hierarchy (Murray & al., 2013).

The presence of pathogens would therefore push us to comply with norms and avoid deviating from the norm, but why?

Several traditional norms are linked to the prevention of diseases including those concerning bodily hygiene, nourishment and sexuality (Karinen & al., 2019). Even the caste system, which includes the untouchables caste in India has an epidemiological origin linked to the spread of pathogens (McNeil, 1976). In the presence of disease, we are therefore intuitively pushed to return to our traditional norms through an aversion to deviation since it would be synonymous with a greater probability of contamination (Karinen & al., 2019; Schaller, 2014). The increase in conformity and consensus around norms solidifies the social identification with the group, thus increasing cohesion by facilitating cooperation, increasing confidence between the members of the group and facilitating the rallying around a leader (Fincher & al., 2008; Haslam & al., 2011).

This is what we are seeing today with Quebecers and our premier, François Legault, and it is also the reason why we are not distrustful of our loved ones. Their familiarity trumps our BIM (Aarøe & al., 2017; Hult Khazaie & al., 2019; Reicher & al., 2016) and leads us to let down our guard to allow more space for the desire for contact caused by longing.

Following our first two blogs, we now have a better understanding of the opposing dynamics of togetherness and distancing arising from familiarity in a time of pandemic. However, even though we have seen that conformity can have several positive effects in a time of crisis, there is a whole negative side resulting from overly rigid social norms.

That is why our next blog will discuss the possible consequences of this type of social change while the last one will complete this series by presenting foreseeable solutions.  To be continued…

Schaller, M. (2014). When and how disgust is and is not implicated in the behavioral immune system. Evolutionary Behavioral Sciences, 8(4), 251.

In the presence of disease, we are therefore intuitively pushed to return to our traditional norms through an aversion to deviation since it would be synonymous with a greater probability of contamination

Avoidance in a time of COVID-19

Avoidance in a time of COVID-19